My story “A Letter from Kriemhilde Stellung” was awarded 3rd place in Canterbury’s Save As Writers’ Group’s competition in remembrance of World War I.  It might be included in a British anthology late in 2015.  Here’s what the judges had to say about it:

The Bigger Picture – Reflections on the Great War

“An engaging short story that grips the reader’s attention right up to the last minute. It begins with an old man in a nursing home asking for paper and pencil. We are then taken back to the cause of his request. Unlike any of the other stories, this actually describes a combat scene. The style is lean, mean and pacey with sparing use of adjectives. Arranged along a double timeline with good use of scenes, crisp characterisation, realistic dialogue and a good plot with a twist in the tail.” 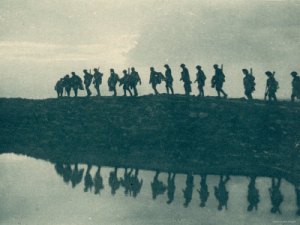 The effects of World War I loom large in daily events and cost American lives even now.  Our public ignorance of this catastrophic war and how it acts upon our lives a hundred years after its end dismays and embarrasses me.  I wrote this story in hopes of adding to general awareness of the War.  I’ll post information here if and when my story is published.